I recently met with Laila Takeh who is Head of Digital Engagement at UNICEF in the UK. UNICEF is a  ‘digital first’ organisation and topped the 2012 Social Charity 100 Rankings. I have been extremely impressed in the way UNICEF has adopted digital media as a tool for advocacy, fundraising and information dissemination so was pleased that Laila agreed to a meeting.

Laila and I had a long discussion about UNICEF’s use of social media. We talked about compassion fatigue and indeed social media fatigue, and ways of iterative re-packaging strategies to overcome this. We also discussed the much debated anti ‘slacktivism’ campaign by UNICEF Sweden ‘Likes don’t save lives’, but one of the first things I wanted to know about was UNICEF’s use of celebrity, which is an area that fascinates me. UNICEF have a large number of celebrity ambassadors or “high profile supporters” including Ewan McGregor, David Beckham, Eddie Izzard, Emma Bunton, Cat Deeley, Robbie Williams and many more. They have a long history of working with celebrities, in fact their first celebrity supporter was Danny Kaye in 1954.

Just before our meeting I had been looking at UNICEF’s YouTube channel to see what videos were most popular. 12 out of the 15 most popular videos are celebrity videos. The 6th most popular video was from someone called Tom Hiddleston, who I’d never heard of even though his filmography is very impressive. If you are interested in social media and celebrity, which I am, then Tom Hiddleston is a great case study. Tom is very active on twitter and has 573,633 followers. I just had a look at Tom’s twitter feed and 5 out of his last 7 tweets mention UNICEF. Those 5 tweets have had a total of 919 retweets. Just think of the reach of those 5 messages. 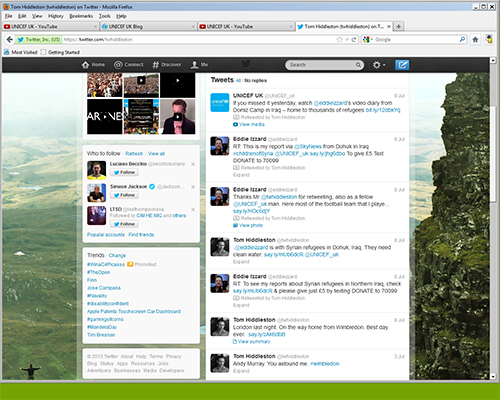 One of his tweets about the #IF campaign was retweeted 417 times and favourited 486 times. Tom’s fans are digitally engaged and on cause. According to Laila, just one of his #IF tweets generated several thousand pounds on their fundraising platform. Tom’s fans (Hiddlestoners) also raised over £30k as part of a Hiddlestoners Have Heart campaign, they even set up their own twitter account for the campaign.

Tom visited New Guinea for 5 days to write a series of blogs. It was UNICEF UK’s first ever ‘digital trip’. He traveled with two members of staff from the UK office, plus his photographer and met up with one member of staff from the country office. The digital team back in the UK regularly updated Tom on daily activity and feedback from the various social media sites. They also asked followers what they would like to see Tom do whilst he is in New Guinea.

Tom’s post are beautifully written, with emotion and great detail. They help to build a picture of the work that UNICEF carry out in New Guinea. They discuss development problems such as water, nutrition, sanitation, vaccination and education, but they also tackle more sensitive issues such as female genital mutilation. I was particularly interested in Tom’s blog on Day 3 where he discusses participatory communication after visiting a rural community radio station and meeting a ‘traditional communicator’.

Kapoor (2013) believes that celebrity humanitarianism is an ideological phenomenon which often tackles the symptoms rather than the causes. He suggests that celebrities bring their ‘star power’ to raise public awareness about development issues, but there is often a tendency to individualise and isolate problems and that broader issues of politics and cultural imperialism are often glossed over.

It is probably fair to say that Tom’s blog posts do deal with the symptoms rather than the causes, but he does touch on politics and history within education. He also talks about development projects needing to be self-educating and self-sustaining. His posts are interesting and engaging with many comments from readers. I think that the  ”Tom Hiddleston’s Guinea Field Diary’ was a roaring success and I’m sure there will be many digital trips to follow.

UNICEF have a long history of working with celebrity ambassadors. Unlike some other development/humanitarian organisations they have quickly adopted digital media strategies and learned how to engage with their supporters and their ambassadors’ supporters though social media.

Reference
Kapoor, I (2013) Celebrity Humanitarianism – The ideology of global charity