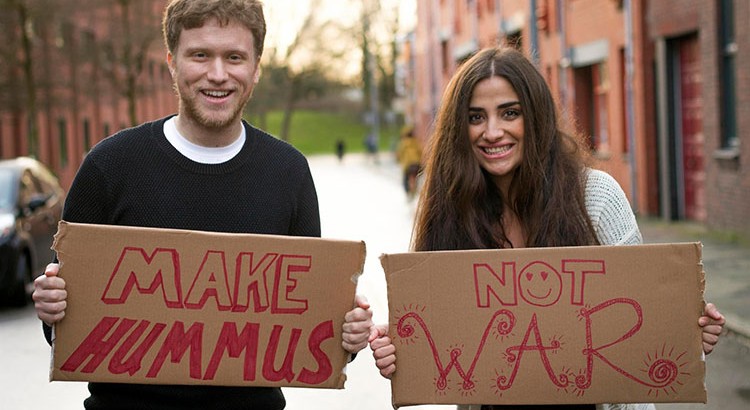 Two young men from the Netherlands are currently on a mammoth bike journey from Amsterdam to Cape Town in South Africa.  Jilt van Schayik (the Netherlands’ United Nations Youth Representative) and his friend Teun Meulepas have embarked on this impressive trip as part of their Building Bridges project (#BB2015UN). The bike tour will draw attention to youth priorities for the Millennium Development Goals (MDGs) and to-be-determined Sustainable Development Goals (SDGs). Jilt and Teun will be travelling more than 9000 miles through 20 countries to reach the general public and local governments, to ask what vision they have for the world’s future.

Jilt and Teun have just passed through the Netherlands, Germany, France and Spain and are about to arrive in North Africa (video of votes collected in a public square in Madrid available here). They will be biking over the next six months in order to collect more votes and to collect stories from local people. According to Jilt, the Netherlands’ UN Youth Representative, “It is vital that we draw attention to the importance of the new sustainable development agenda and particularly that we engage women and youth in the decision making process. It is my goal to meet with as many people as possible on this trip and document what their priorities are. As the Netherlands’ Youth Ambassador, I want to bring these stories back to the UN to make sure the peoples’ voices are heard.”

Jilt and Teun have teamed up with 20 Building Bridges youth Ambassadors to facilitate events in cities and towns along their route to spread awareness about the goals and MY World votes. They will be meeting with local, national, and international representatives along the way to advocate on behalf of the use of the survey results when determining and implementing the sustainable development goals this fall. The project is supported by the Netherlands Government and all its missions along the way, as well as UN Women, UNDESA’s focal point on youth, and many civil societies and other partners.

The UN’s MY World survey has been collecting votes from the public via internet, mobile, and hard-copy ballots. According to Mitchell Toomey, Director of the Millennium Campaign (which oversees MY World), “This survey is the largest public engagement initiative worldwide. As a result, over 7 million votes have been collected, nearly 6 million of which were collected on paper ballots and nearly 70% of which were collected from youth (ages 30 and under).”

There are many ways to get involved via social media. You can fill out the MY World survey (http://vote.myworld2015.org/), take a selfie with your top vote, and tweet it using the hashtag #BB2015UN and @myworld2015.

View the online data based on gender, age, and location here: http://data.myworld2015.org

The data is also aggregated based on country responses here: http://map.worldwewant2015.org/