I watched the horrific Delhi Gang Rape story unfold on social media over Christmas. I promised myself and more importantly my family that I wouldn’t blog over Christmas. Today’s superb blog ‘Social Media and Protest – The Indian Spring?’ by Professor Ravinda Barn has insipred me to write down my earlier thoughts which mirror her own – “To what extent were the India protests organized by Twitter, Facebook and other forms of social media?

The first I knew of the story was via Twitter when Ghazala Airshad (@ghazairshad) shared a blog post on 23rd December by Indian writer Nilanjara Roy ‘Notes from Raisina Hill’.  Roy talks to many of the protesters and notes “Almost all of them heard about the protest on Facebook and Twitter, or from friends—not through the mainstream media.” She notices two very different types of protesters. In the morning peaceful protests mainly by students and by the afternoon people there just for the TV cameras. I wonder whether at the time of writing her blog she thought the story would snowball globally.

I was also intrigued on New Years Eve by the article in the Times of India “The year social media came of age”. It made me wonder whether the tweets by Sambhavi Saxena were the catalyst for the story reaching the masses across the world. I don’t think so looking back at online articles, but I’m sure it helped.

Reading Saxena’s Twitter Account I was amazed at how often she had tweeted whilst being detained. I wonder whether police officers around the world will make sure they confiscate people’s phones when they make arrests in the future? 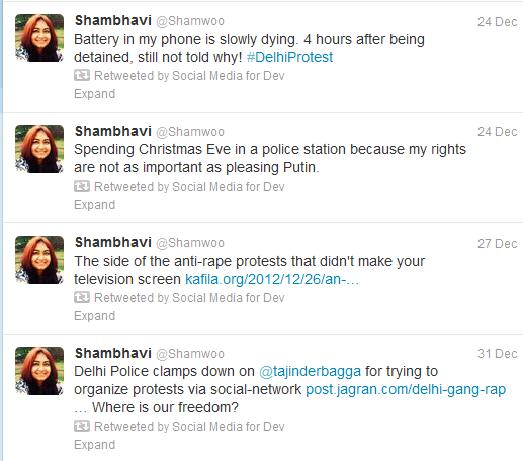 I love that Professor Barn’s calls this the Indian Spring. I wish I’d come up with that great linkbait title, however I think she could be right. Is this just the start of the Indian Spring? Will the government’s promises to review safety for girls and women in India be carried out? Only time will tell, but I truly hope so!