The first mistake we made was to each so much the day before we started the challenge. We decided that we would go and have a large full English Breakfast at a new cafe that had been recommended to us. There were also some sheekh kebabs left in the fridge from our Valentine’s meal. Obviously they couldn’t go to waste!

So we started the day with a bowl of porridge and jam as recommended in the Live Below the Line Cookbook. I’ve never had porridge before and to me it was like eating school dinners at the age of 7 all over again. Sarah on the other hand loved hers. I was feeling very hungry, probably due to over eating the day before. Don’t make this mistake if you decide to take the challenge. To try and fill up my stomach I drank a lot of orange squash and hot lemon squash. Probably another mistake as I was rushing off to the toilet a lot more than usual.

Lunch came in the form of one triangle of Laughing Cow spread on two slices of cheap wholemeal bread. I enjoyed every bit haha.

That evening I made 5 days worth of vegetable curry. 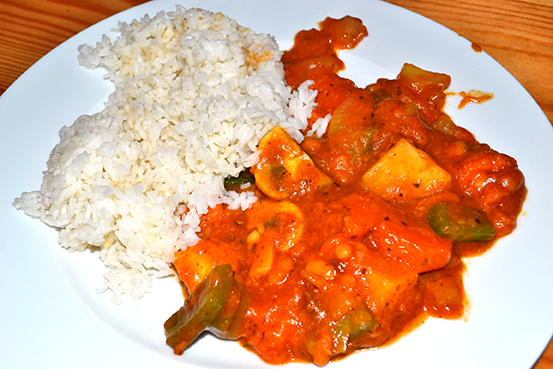 It tasted fantastic. The ingredients we had bought didn’t make loads of curry but it was ample. However it was obvious that the 40p bag of rice would be plenty enough for the week to provide quite large portions for one meal a day each.

Both of us realised how much we eat the kids left overs. There were 3 fish fingers just starting at me, saying eat me. It certainly made me realise how much food we waste. I really wanted those fish fingers!

Today we more or less had the same 3 meals all over again. I could see very quickly how bland living below the line can be. I also had a headache all day, probably through lack of caffeine. At least my body had adjusted somewhat and I wasn’t feeling so hungry.