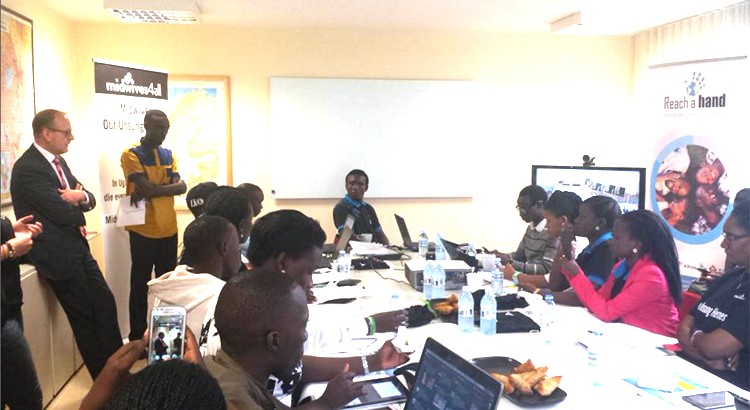 Nearly 300,000 women lose their life due to childbirth every year and almost 3 million newborns die in the first month of their life. Earlier this year the Ministry for Foreign Affairs in Sweden launched a global campaign called ‘midwives4all’.

Uganda’s maternal and health indicators are amongst the poorest in the world. High maternal mortality is fuelled by a lack of trained midwives and low staff retention. As a response to this the Embassy of Sweden in Uganda joined the midwives4all campaign to influence policy makers, mobilise communities and attract young people to train as midwives.

Next up in our warm-up for the #midwives4all documentary, our champion, Hon. Dr. Chris Baryomunsi, Minister of State for Health, on Uganda’s progress with MDG 4 and 5

midwives4all worked with mass media (TV, radio and print) and organised a series of events to promote the campaigns and its key messages. Social Media also played a large part in the campaign. To reach out to a younger segment and to create a social media storm, a half day seminar for 38 young bloggers was organised.

Ane-Kirstine Bagger Birnbaum who is a National Program Officer for the Embassy of Sweden in Uganda said “The young bloggers’ seminar was a collaboration with a youth-led organisation called Reach a Hand Uganda (RAHU). I had worked with them at my previous workplace and approached them to see if they could help me get a good group of young bloggers. RAHU works on advocacy in the area of adolescent sexual and reproductive health and are frequently experimenting with ‘alternative’ media channels – i.e. social media (storms, hackathons), pop music and arts, flash mobs, etc. They have a network of peer educators who have all been trained in issues of young people’s sexual and reproductive health. The young bloggers that participated were therefore familiar with the concepts of maternal health and the benefits of using midwifes and at the same time they fitted with the key message of making midwifery a career of choice for young people. In addition to the RAHU peer educators, I had also identified a few midwifery students to participate to ensure a balanced discussion. The bloggers not only created a social media storm (as a warm up to one of our campaign events), it also helped the Embassy establish a small pool of advocates / ambassadors for the campaign cause.”

The seminar attracted a lot of attention and reached 631,512 Twitter users. It was an innovative and cost effective way to reach a new audience as well as building capacity. In addition to the blogging event a total of 46 campaign related updates were posted on the Embassy’s Facebook page with a total of 1,059 likes and a reach of 71,494. Twitter was also used actively with a total of 263 tweets from the Embassy’s and the Ambassador’s official Twitter accounts.

I asked Ane-Kirstine what advice she would give to other development organisations who want to engage with policy makers about issues using social media. She gave me 5 tips: