With NGOs under constant scrutiny from organisations such as Radi-Aid, which seeks to minimise stereotyping in fundraising adverts there has been a gradual shift in narratives in recent years. Save the Children have recently released an informative piece of research called The People in the Pictures. This research is the first time that “contributors” or the protagonists of NGO imagery and stories have been asked about the process of image making and their portrayal in the communications. 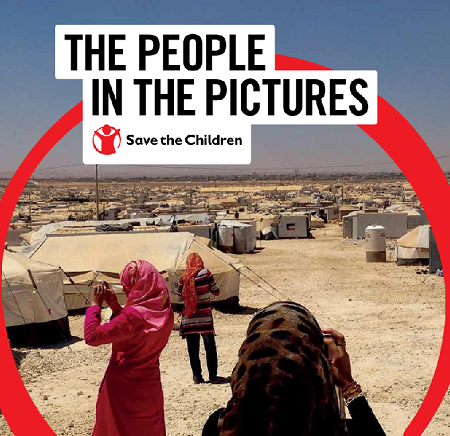 The research included 39 interviews and 21 focus groups across four countries: UK, Jordan, Bangladesh and Niger. In total there were 202 research participants. Findings are grouped into three main areas: motivations, process and portrayal.

I found the section on informed consent particularly interesting, especially that contributors in Jordan, Bangladesh and Niger “only had a vague idea of the purpose” of the photo shoot. Having commissioned photography for a large part of my career I sympathise to some extent, but it worries me that large INGOs who have established country offices and local partners are still unable to successfully implement informed consent.

Is it a language / translation issue or are the people in the pictures simply unaware of the myriad of communications that INGOs are using the imagery for? I was pleased to see in the recommendations that Save the Children are reviewing their guidelines. Surely a simple solution is for photographers to take examples of previous campaigns and for these to be translated so local communities can understand how their images might be used?

The reasons for not contributing were social stigma, fear of reprisal, the permanence of the portrayal, lack of confidence or self-esteem and lack of direct benefits. All of these reasons confirm why stringent implementation of informed consent is fundamental.

Some of the problems associated with informed consent include the photographer not speaking the language of the contributors and the lack of media literacy. The problems with hiring local photographers is a recurrent theme when I talk with communication professionals in the sector. I have recently encountered similar problems myself. This is one of the reasons I am an advocate of WaterAid’s Voices from the Field initiative which I have witnessed first-hand in both Madagascar and Nepal. I know that other NGOs have considered this approach to gathering images and case studies, so why hasn’t it happened? I can’t imagine that cost is the issue.

It is encouraging to see Save the Children have utilised participatory photography in their portfolio of image making. Participatory photography projects are becoming more popular and this is to be applauded, but how successful are these projects in reality? The dissemination of these images is not particularly widespread. Take for example the Inside Zataari project, which has just over 1600 followers on Instagram. In fairness it has received some very positive media coverage which is a different indicator of success. I do wonder which INGO will be brave enough to use images taken during a participatory photography project and use then in a national or international advertising campaign rather than using them on an Instagram account with a relatively insignificant audience?

The recommendations in the report are commendable but how many will be implemented in reality? Giving copies of the images to the contributors is relatively simple with portable printers, but it is not very practical. Who will be accountable for this? The UK office? The Country Office? The Photographer? More importantly how will the process be managed and at what cost? It would be more appropriate to provide the contributor with the image used in its final state e.g. adverts, poster, video. This is even less practical, and whilst I’d love to see this happen I’m not holding my breath.

I’m really intrigued about the proposal to develop location and language specific resources to communicate image use more effectively. This is an excellent idea and something that could be developed collaboratively across the sector. I’ll be bold – is this something that DFID or DEC could facilitate?

In publishing the People in the Pictures and inviting a range of guest from across the sector to a formal launch, Save the Children have reinvigorated a discussion that is often buried in the to-do list of well meaning communications directors. Please don’t let this important discussion fade away – use this research as a catalyst to further improve NGO communications and dignified representations of distant others.