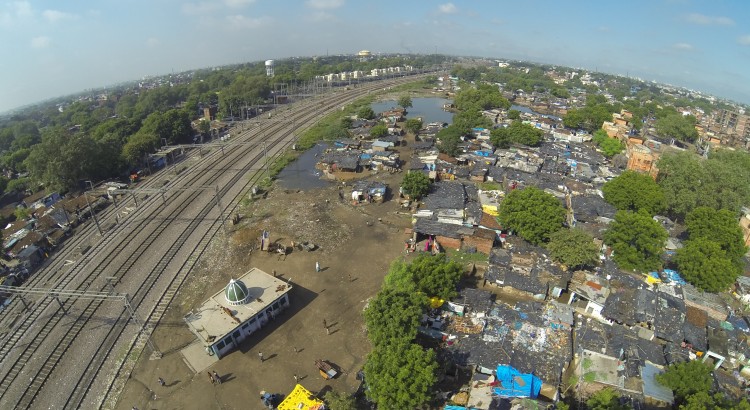 I recently organised for Steve Melia, Head of Film at WaterAid UK to speak to students on the MA Media and International Development course that I teach on. The seminar was a huge success and many students (and myself) were engrossed by a film ‘Across the Tracks’ that WaterAid produced this year. I caught up with Catherine Feltham, the producer/director to find out more about the production.

Trailer for Across the tracks by WaterAid.

Why did WaterAid produce this film?

We were commissioned to tell an in-depth, character-led story that people would be able to connect emotionally with, while also demonstrating the impact of WaterAid’s work in India through the HSBC Water Programme. ​

After meeting HSBC NOW TV, a web-based TV programme broadcasting weekly to HSBC’s 265,000+ employees and wider community around the world via the organisation’s intranet and external YouTube channel – we set about identifying the right story to give an insight into WaterAid’s work in India. We were struck by one particularly challenging urban slum, where lack of sanitation was a major issue. We quickly identified that violence against women and girls was prevalent in the slum, and that the lack of toilets only added to this risk.  This also felt the right time for WaterAid to make its own in-depth documentary film, which could be pitched to different audiences such as film festivals and media outlets.

What are the objectives?

At the front of our minds was that this story should meaningfully contribute towards the national and international conversation around Clean India​, a campaign launched by the Indian Government in October, which aims to see a toilet in every household by 2019. As well as attracting global attention to sanitation issues, we were keen to show that not having access to somewhere safe and clean to go to the toilet doesn’t just impact on health, but also dignity and livelihoods.

One of the key messages we wanted to emphasise was that everyone, everywhere should have access to basic necessities such as a toilet, regardless of where they live.

Who is the main audience?

We wanted to reach a wide audience, from HSBC employees and WaterAid supporters, to policy makers and people working in development. We also wanted to tap into an audience of film enthusiasts and the culturally engaged.

How long did it take to produce? How many people were involved?

We undertook a recce in April 2014 to identify potential characters for the film.  This took place in as part of an existing WaterAid supporter visit to Kanpur, India. This was really crucial for the planning of this film as it enabled us to gather interviews with several people living in the slum, get a sense of people’s personalities and how they might be on camera, and to start to work out who the key individuals were who were engaged with the WaterAid project there.

After the recce we started regular communications with WaterAid India and the project partner, a charity called Shramik Bharti, which delivers the project in Rakhi Mandi and therefore knows the community closely.   We discussed the full implications of filming with them, impacts on the project, people’s time and the logistics around filming the construction of Radha’s toilet from start to finish. We wanted to film ‘in the action’ and actuality style footage, rather than after the event, so we needed to ensure this was possible. We didn’t want to turn up to a toilet already half way through construction!

As the shoot only had one content-gathering objective, we had time to consider how to create a product with high production values.  So we researched film techniques and styles and this is when we decided to gather aerial footage.  We booked an Indian drone operator called Nikhil Thakkar, from Wonderwork Productions, and worked with him to gather general shots to show the scale of the slum, the location of the slum, the area the community used for the toilet, and also to gather shots of each character from above.  We felt this footage would be integral to telling the story by showing the challenges of the urban slum environment. 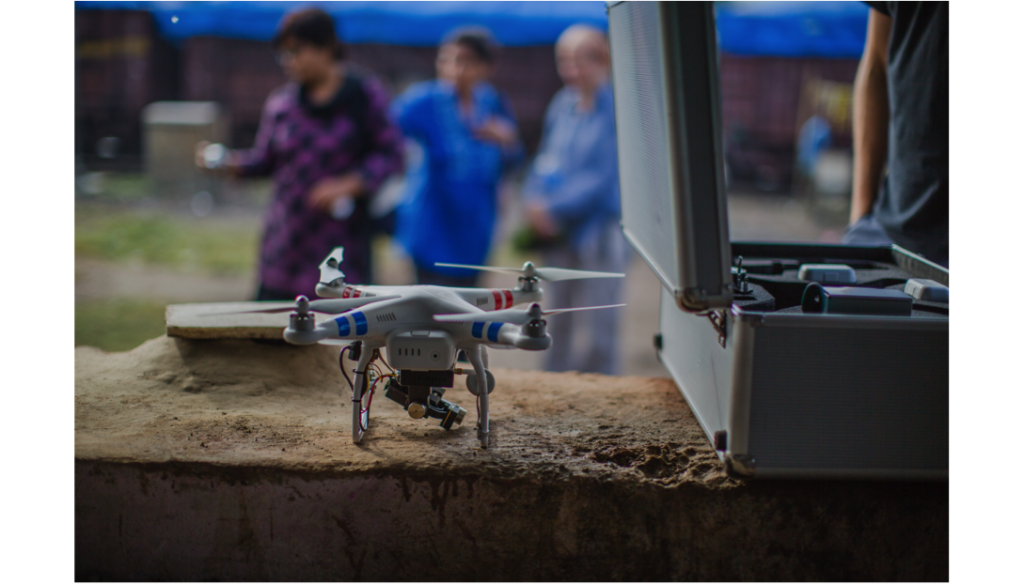 The shoot took place in October 2014 over ten days, with the first two days used to complete the recce and plans with no cameras out.  The core team on the shoot was made up of myself (producer/director), the DOP, a second camera operator/photographer, and two translators.  In addition we had fantastic support from Shramik Bharti day-to-day, and WaterAid’s Partnership Communications Manager joined for half of the trip to help with logistics, and wider fact and story gathering to build the context. We also had the local drone operator join for two days of the shoot. Having the support of the WaterAid India local team was also integral to making the shoot a success.

In December we began the edit and completed the 20 minute and the 10 minute film the day before the deadline (25 January) for the first competition we wanted to enter!  We were shortlisted in the final 10 films (of over 100 entries) in the Rankin and DocHeads short film competition 2015. Our 10 minute film is now live on the Rankin site as a result of this exposure. We hope that this is the first of many distribution opportunities for the film and Radha’s story.

The film also aired HSBC NOW on 6 February and received overwhelmingly positive feedback from employees including converting an editor from HSBC’s production company into a new WaterAid monthly donor! The intranet version of their film has reached nearly 16,000 people so far. As you can probably gauge, a lot of people were involved in the project overall, from internal WaterAid stakeholders, to the partner organisation, the corporate partner and production staff.

How did you choose the main character?

The main character is Radha Verma.   Radha immediately stood out as she had engaged  with the WaterAid project work very early on in an environment where it was very difficult for our partners (Shramik Bharti) to gain the trust and ears of the community.

Rakhi Mandi slum is situated next to the Delhi-Kolkata railway line in Kanpur, Uttar Pradesh, Northern India. Rakhi Mandi is one of the oldest slums in Kanpur, thought to be around 65-years-old. There are at least 3,500 people living here.  The biggest challenge with the project work was to change people’s mindsets. Living on unofficial land with no support from local government, people thought nothing could be done and that they were born to live like this and that going to the toilet in the open was just the ‘norm’.

Before the project could get underway, Shramik Bharti had to bring a largely disparate community together. Community facilitators described families in Rakhi Mandi that were not close, with high levels of domestic violence, alcoholism and drug abuse. It took a long time to identify potential leaders and build people’s trust. In the first five months they visited Rakhi Mandi every day, focusing on cleanliness, and started to encourage families to build soak pits to dispose of household waste water, which would bring a visible change to people’s homes and surrounding areas, and go some way towards tackling serious drainage issues in the slum. Shramik Bharti first talked to people about their personal problems, their health, their kids, and built up a bond, before identifying leaders, forming a water user committee and training them on how to access services from local government officials.

Radha shone as an example of someone who wanted to change her situation and understood the benefits to her and her family. She had been one of the first in the community to build a soak pit and was also really determined to get a toilet for their home as her daughter Nisha has narrowly escaped an attack when going for open defecation.  This incident also demonstrated the very real dangers women and young girls face, as a result of having no safe place to go to the toilet, without sharing the detail of some of the more violent stories we were aware of such as rape in the community.

Do you think it will share very well on social media?

We believe that social media will be a powerful tool for promoting the film and the wider story the film tells. Already the trailer for the film has received nearly 1,500 views on Vimeo without any real push to it yet.  It was liked by well-known filmmaker Philip Bloom who tweeted it out in the first few days and we saw a huge boost to views after this.

We have not started social media activities around the film with full force yet as we are still pitching and entering the films into competitions and to media outlets. However, the small social activity we have done so far has proven to engage with audiences. For example, we edited a 15-second ‘Instavid’ version of the trailer of the film for Instagram and published it the day that the Rankin/DocHeads film competition winner was announced.   The film gained 277 views, and nearly 10% of those people used the URL link we provided to visit the website to view the film.  Our average views on an Instavid on our channel range between 200 and 300 and we don’t usually provide URL links as these are not direct links within Instagram, so we were pleased with the rate of people who used the link to visit the page.

We have more Instavid’s edited and ready to use as we begin to push the film out further and we will also be using Twitter and Facebook to promote the film.  The social media pick-up will of course be more successful if we can link the film to a film festival or screening as we will be able to tap into wider networks outside of WaterAid.

Are you going to enter it into any film festivals?

Yes, absolutely. We have already begun the process and will be continuing to submit the film throughout the year. Before we went on the shoot we put together a draft distribution plan which included film festivals, competitions, online sites, media outlets and screenings.  Our colleagues in India are also researching festivals in India that we can submit the film to.