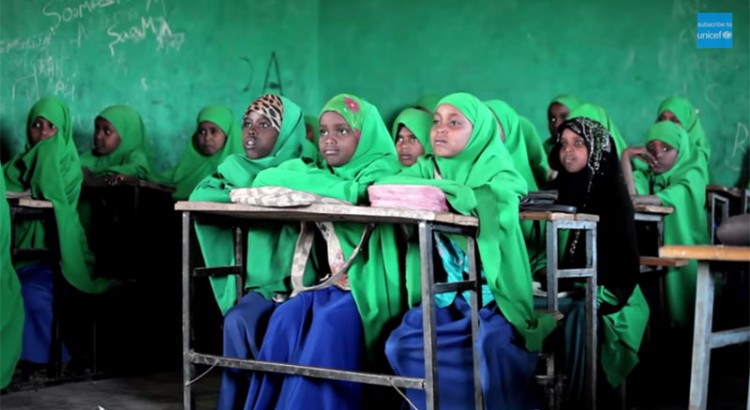 UNICEF’s recent music video series designed to raise awareness of children’s rights has undoubtedly reached an audience who were possibly oblivious to some of the suffering  portrayed in these powerful films. To date the videos have been viewed by over 300,000 people and earlier this week the final video in the series was released featuring SOJA.

The production of this series over the last two years has taken an immense amount of planning. I contacted Nicholas Ledner, Digital Knowledge Coordinator at UNICEF to find out more about the creative process behind the videos.

This series of music videos must have taken a lot of planning. What were the most important factors in its success?

The most important aspect of this work is selecting the specific child rights issue – whether its access to education, ending violence or improving water and sanitation– to highlight in the music video. We do this by working closely with our colleagues in the country office to identify an issue UNICEF is advocating for locally.  For example, in the Chad RL Grime video we focused on child marriage because Chad has the third highest child marriage rate in the world, while the Ethiopia video focused on education as many children in rural Ethiopia are out of school.

You also need to ensure you identify an artist that has a significant fan base, that’s critically praised, that is smart, intelligent, passionate and understands your work. This is essential for success and for a mutually beneficial relationship.  The team the artist works with is also very important.  You need to know they’re willing to help you seed the content with different outlets.

I know that seeding is vital in these campaigns. Can you tell me a bit more about the process of seeding.

It is amazing to watch how some videos achieve traction or the snowball effect.  We always try to ensure that our media team is in sync with the artists’ publicity team and normally the publicity team is excellent at getting the core message of the video to external audiences – at least to relevant music media.  A press release at their end also helps.

Take the ODESZA video as an example. Their team posted something on their website and across social media, which resulted in an excellent article on thissongissick– (large music blog), whose Facebook Page has more than a quarter of million fans, all enthusiastic about music and great new collaborations.

On top of all this, we’re promoting videos strongly now on Facebook and YouTube, which means the number of views is split between the two platforms.  For some of our most successful videos, a lot of the views stem from the fact they are being hosted on external media outlet websites (earned media) such as Huffington Post, Upworthy,  APlus , etc. which all link back to the Youtube version of the video on our UNICEF channel (and not the Facebook Page).

For instance, the average view time for the Chad Child Marriage video which featured a track by RL Grime is 2:56 seconds (76% of the video), which is tremendous and can perhaps be linked back to the fact that engaged audiences are viewing this video from a player on a website they trust, rather than stumbling upon the video from a link they clicked.

How important was the relationship with the country offices to the production?

Working closely with colleagues in our various country offices is essential to the success of these videos. It’s the country offices who have the most knowledge and understanding on the issues affecting children in their countries. They also can localize the videos so they are relevant for their audiences.

For instance, when we worked with the UNICEF office in Tanzania to create the Four Tet video on child protection issues, our colleagues in Tanzania included their local goodwill ambassador into the video as the mother character.  They also included a prominent musician from the region as the father.  Colleagues in our country offices are also very good at utilizing the video for important advocacy purposes.  For instance, after the video with Moderat in Paraguay was created, the government officially recognized UNICEF’s #ENDviolence campaign. Another example is that the First Lady of Chad showed the RL Grime child marriage video to Heads of State and their spouses at the recent AU Summit in Addis Ababa this past January to support the AU’s #ENDChildMarriage campaign.

How are production teams selected?

Aside from the Chad and Namibia videos, all other videos were shot by local production companies.  Rooftop Productions is amazing and created the RL Grime, BANKS, and ODESZA videos.

We normally go through every possible production company before deciding. It’s a balance between quality of work and who will give us the best deal. All of the artists provided free licences to use their music.

Who has the responsibility for the storyboarding?

We have a storyboard for every video created. We tend to start the process as a team and then we have a few rounds of revisions based on feedback from both communications colleagues and the different program teams that are involved. There are so many talented colleagues in UNICEF who contribute to the creative process.

How long did it take to make each of these films?

It takes approximately 3 months to create one of these videos.  Ensuring you identify the best time to launch the video is also important in reaching the most people with these important messages about children’s rights.

For instance we starting shooting the ODESZA video in late October because we wanted to launch it on World AIDS Day, December 1st.

Why did UNICEF decide to focus on making music related videos?

Music resonates globally and has helped us provoke conversations around key issues UNICEF advocates for. Music can often touch people in ways other media cannot. It makes them think about their own lives and helps them relate to others because they feel something in the music which is sometimes harder to convey to a general audience.

When you can see your product being talked about on the largest social media networks in the world, then you know something went right and you can celebrate the idea that at first was only a glimmer in an eye. It’s a complicated but enjoyable process which I love supporting and bringing to life because I myself love the videos, grew up loving music (and still do) and I’m able to bring my passion and expertise together with these sorts of campaigns.

I’ve also heard from up and coming artists that they love these kinds of collaborations as it gives them a chance to give back and be a part of something both cool and educational.  It’s a special process, for sure, and something that lights up my work.  I’m sure these videos will be watched and shared for many years to come.