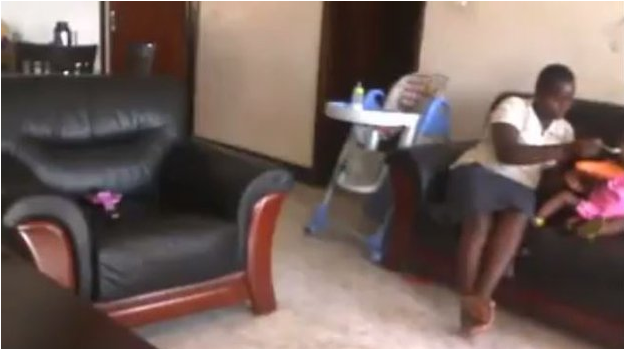 Many of you will have already seen the horrific video which was circulating on social media last week about a nanny abusing an 18 month old baby.

The father, Eric Kamanzi, had suspected that the nanny was abusing his daughter so set up a hidden camera in his living room. The video is truly shocking and shows the nanny, 22 year old, Jolly Tumuhirwe, throwing the girl to the floor after she is sick and then beating her with a torch, kicking and standing on her. The video was originally posted on Facebook and shared with friends, but then went viral and has been viewed with horror all over the world. She has been arrested and charged with attempted murder.

In Uganda the video was shared using the hashtag #EvilNanny and #NannyfromHell and was covered all over the media. The hashtag was trending in Uganda and was a catalyst for debate in civil society about child raising in modern Uganda.

The trend of middle class homes resorting to nannies is a shift from the prevalence of extended family structures. #EvilNanny

At the time of writing a YouTube clip of the NBS report in Uganda has had well over 400 comments. Many other media channels have posted the footage, all of which have attracted similar discourse. The video has created uproar on YouTube, Twitter and Facebook across the globe and has resulted in the Ugandan government reviewing legislation as a matter of urgency. Is this an example of how social media is helping to change the world for the better? It’s a shame that we need to rely on these relatively new platforms to make people aware of such atrocities.

Ms Tumuhirwe is due in court on 8th December 2014.