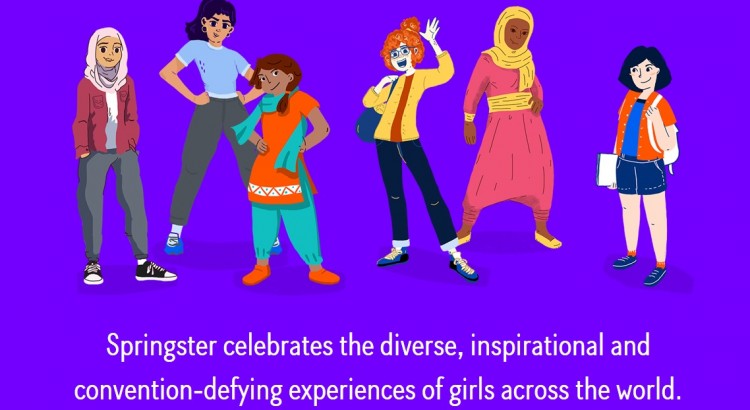 Springster – a mobile-first platform to connect vulnerable girls to each other and to relevant information and advice.

The world is getting more connected every day. In 2017 there were nearly 5 billion unique mobile users – 66% of the population. Globally there is a much more burgeoning connectivity amongst females, which means that there are more and more vulnerable girls online. In the next 5 years it is predicted that two out of every three new mobile owners is going to be female.

I was delighted to interview Esther Press, who is the Global Content Manager for Springster, a unique mobile-first behaviour change platform, created by Girl Effect, which aims to build vulnerable girls’ confidence, knowledge and skills. One of Facebook Free Basics’ top five most visited sites, Springster is available in 69 countries across the world and translated into 17 languages. Each time Facebook announces that it will be launching in a new country, Springster ensures content is available for that market. Springster is currently launching in Cameroon, Sudan and Cote d’Ivoire.

The project has been designed after extensive research in Asia and Africa with over 350 girls, 100 boys and a number of parents, experts and influencers. Insights from these research workshops enable content to be created that helps girls face their everyday challenges.

Springster has been optimised specifically for low-bandwidth environments so that it is available on feature phones as well as smartphones. The content is inspired by teen media platforms like Buzzfeed and the Khan Academy. Springster currently has around 1.3 million average monthly users and received 30 million unique visitors since its launch in 2015.

Springster has four key ‘deeper dive’ markets – South Africa, Nigeria, Philippines and Indonesia. In each of these markets there are dedicated content teams made up of girl writers, researchers, creatives, planners and account managers.
Esther commented “We have a unique evidence-based approach to content creation. In each of the key markets we carry out extensive research into the cultural and social elements which affect the kind of content that girls want to be delivered. It’s super localised and personalised. The rest of the markets benefit from a global content set and Girl Effect work with global freelancers, where we have a roster of incredible writers who are based across the world. We don’t just work with writers in the UK. In the future we aim to localise and tailor content in more countries.”

In each of the key markets, there are dedicated moderators called “Big Sisters”. Their persona is a trusted, sassy, older sister. All of the Big Sisters are trained in child safeguarding and gender issues and work on the Springster content management system to answer all the comments. In Nigeria they can receive over 3000 comments per month. There’s also a stringent flagging process in place for profanities and risky comments, whereas in the global markets comments are not switched on.
People can only comment on the site once they have registered. When individuals register no personal identifiable details are taken. The big difference from platforms like Facebook is that no personal information is asked for. Individuals are encouraged to set up a username which has no link to their real identity. There is no messaging platform within the site, so no one can contact individuals directly.

Entertainment with a purpose

Springster at the end of the day is a behaviour change product. The site needs to be entertaining to capture girls’ attention, but every single article has a purpose. Girls benefit from the reassurance and advice generated by shared stories and experiences from other girls like them. Content that caters for girls’ needs is often hard to find and topics they want to find out more about e.g. periods, relationships, sex are often not readily available. It is important that articles are culturally on trend, looking at topics of the day such as K-Pop and celebrity culture. As Esther commented “We put the girl at the heart of everything we do. We want to celebrate the diverse, inspirational and convention-defying experiences of girls. We look at the attitudes, knowledge and behaviour that we need to change to impact their world.”

Even the use of imagery is extensively tested so that it is relevant. In Indonesia girls responded mostly to quirky drawings and cute illustrations, whilst in South Africa the research showed that girls would find photography more appealing and engaging.
Measuring Impact
Springster has a custom-built dashboard to measure the impact of its activities. Using a range of measurements such as surveys, comment analysis, site analytics and interviews with girls who have used the platform they are aiming to measure changes across all of the impact areas that they have identified. This data also informs what kinds of stories Springster need to focus on in the future.

In the future Springster intend to extend their reach in the social media ecosphere. They are currently researching options to introduce YouTube and Instagram in their key markets, but are also considering BBM, WhatsApp and Dark Social.
Crucially, the team are working on plans to better utilise the incredibly rich data related to reach, engagement and participation on Springster, by launching a new measurement dashboard in 2018. This dashboard will not only measure how girls use the platform, but to what extent it has helped shift girls’ knowledge, attitude and behaviour in the offline world too. This innovative approach has seen the brand featured as a best practice case study by DIAL, the Digital Impact Alliance at the United Nations Foundation, as part of their series on the ‘Principles for Digital Development’.

To find out more about Springster click here: http://www.girleffect.org/what-we-do/springster/

With the countdown to the festive season well under way I thought I would share a few Christmas campaign videos I have seen recently. It’s ludicrous how much money is spent at Christmas time and I think this has been epitomised by the latest Disneyfied, Lily Allen singing John Lewis Advert that cost £7 million. Sure, it’s a beautifully made animation, but spending £7 million to encourage us to buy more STUFF (see the Canadian Red Cross video below) when people in the Philippines are desperate for aid.

Please send me any more examples of Christmas Charity Videos that you think are worth adding. Ho ho ho.

Save the Children UK>

Save the Children – Christmas Sessions

Canadian Red Cross – The Spirit of the Holidays

Save the Children – Jack Topping

Today I read a journal article Development Made Sexy: how it happened and what it means written by Cameron and Haanstra (2008). The article argues that the way in which NGOs represent the global South and development are hugely important in the construction of social power relations between people in the global North and the global South.

What are the downfalls of both these strategies in raising public awareness of development issues in the North? The paper doesn’t really offer a solution, but suggests in it’s conclusion that an alternative approach could be humour, which has been recently used in successful campaigns such as Greenpeace’s Mr Splashy Pants.

I’ve recently written a lot about video and today took part in the shortlisting panel for a new video award from Africa for Norway. Inspired by the article and shortlisting process I decided to share (in no particular order) some of my favourite ‘funny development videos’ .

No Woman, No Drive

I want a Goat
http://youtu.be/QmoVuqRS2NI

I’ve never heard of these two guys before, but I love their video similar in vein to Africa for Norway. Great wigs too.

What do you think?

I blogged about my Top 10 International Development videos a few months back. At the time I wondered whether to do my Top 20 or Top 10. There are too many videos not to give you the full list……

This chilling video is so effective and talks directly to a western audience. Many people have no idea that millions and millions of people do not have access to sanitary facilities. This video makes that point very clearly. I’m surprised it has only around 5,000 views.

I’m not a huge fan of this video, but no one can doubt it’s phenomenal success as a “vital video”. It’s been debated to death so I won’t comment here – see my earlier blog if you are interested in a critique. If for some reason you haven’t watched it – please be patient and watch all 29 minutes. Apart from the oversimplification of the storytelling, my other big criticism is that they have turned off the comments.

Very professionally executed and so catchy. A great parody. I haven’t been able to get the song out of my head for the last 2 weeks, which is why it gets such a high position in my “chart”.

A staged flashmob to highlight the dangers of pregnancy and birth around the world. I also love breakdancing. Not personally, just as a spectator. Are they pregnant or aren’t they?

A simple but clever idea with brilliant production values. Not only has this video had over 2million views it also received international media coverage within a couple of days of its release. Read more about the seeding of the video in one of my past blogs.

I must have watched this video 20 times and it still makes me laugh. Brilliant scripting and production. Most importantly it succeeded in its goal. Love it!

This is superb! Really made me smile. It’s fun, well produced, well rehearsed, educational and has a simple message. “We Africans Want the Same Things You Want. Survival is Not Enough.” Excellent!

I really can’t say why I like this video so much, it just makes me smile. I’m not sure if it will increase ethical purchasing much though.

Another interesting video in a similar vain to Africa for Norway. It seems that there is a new paradigm of development communication emerging.

A great sketch for Comic Relief with a few surprisingly funny cameos. See my blog on the Huffington Post about irony in development communications.

A tongue in cheek look at development workers in ‘Africa’. Note the negative comments in the YouTube comments.

Don’t watch this if you are squeamish! Very effective video, which resulted in Nestle re-sourcing its palm oil.

Clever with great sound track from Simon and Garfunkel. I love the split screen.

Chilling imagery and powerful use of celebrity endorsement with Ellie Goulding.

Silly. But it’s my era and I love dancing and ghetto blasters.

I had to include this film somewhere as I helped produce it for the School of International Development. I hope you like it.

I don’t love this video, but you can’t deny its success.

I have young children. This gives me goosebumbs. If only life was this simple.