Yesterday I met with Stephen Brown from the Global Poverty Project who manages the Live Below the Line Challenge in the UK. Last month I wrote another blog post about the campaign as I was undertaking a trial 5 day challenge.

Live Below the Line has been running in the UK now for 4 years. Last year they raised £500,000 for several charities, the year before it was £188,000. I’ve been fascinated with this campaign ever since I first heard about it a few months ago as I think it’s an excellent way to combine fundraising with awareness raising. I asked if I could meet up with Stephen to discuss two areas that interest me the most: social media and celebrity advocacy.

Below the Line have two main aims for this years campaign: participation in the challenge and raising brand awareness. For deepening engagement and brand awareness they target the national media, and to encourage participation they target the local/regional media. Nationally they are very interested in publications such as Heat Magazine and the Daily Mail as they hope to change mainstream perceptions on aid. I asked Stephen if he feels that celebrities are important for non-profit organisations to deliver their message. He believes that in order to get coverage from the mainstream media it is essential to have celebrity support otherwise they simply aren’t interested. For example, they managed to get coverage by the Daily Star this year as they had a small quote from Gordon Ramsey who had made a recipe for their website. They also had potential coverage by Channel 5, Sky TV and Sky News – that was until they realised that they had no ‘A’ list celebs taking the challenge. I’ve worked with, and in, the media for a long time, but I didn’t quite realise how shallow they can be. Below the Line have tried to get celebrity supporters but they insist that they must take the challenge. It is important to them that the celebrity has integrity and cares deeply about the cause. This makes their agents/publicists nervous who are often risk adverse when it comes to their clients ‘public brand’. Securing a top celebrity is a key milestone for next year.

So what about social media. Last year 11% of their participants signed up for the campaign via social media. A lot lower than I thought. However this year that number is already up to 18% and they have employed a paid intern specifically to manage their Facebook and Twitter channels. On Twitter they engage with their audience, retweet stories, hold competitions etc. They also actively contact celebrities and politicians on Twitter to see if they can raise awareness. Melanie C tweeted about the campaign on their launch date and she has 373,392 followers. 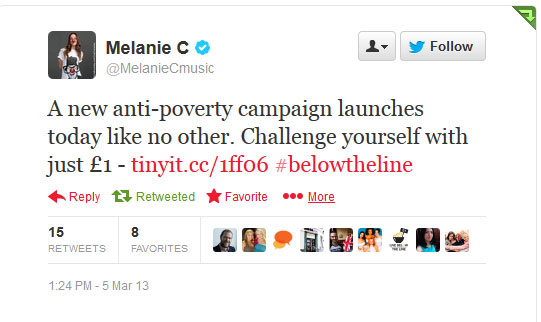 This year they’ve produced a Facebook App which has recipes from celebrity chefs and also allows you to upload and share your own recipes. Participation is not great at the moment but there’s still time. They also have a video due for release the week in April from the makers of the #danceponydance viral.

I’m surprised that the Below the Line campaign hasn’t spread more on social networks. It’s a quirky challenge and I thought it would attract a young demographic who would then share the challenge with their friends.