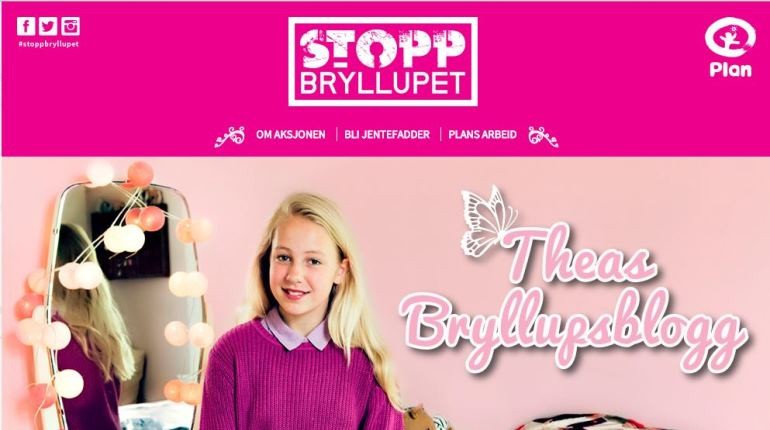 A colleague has just shared the latest campaign from Plan International about a child bride in Norway called Thea. It is extremely clever and like several other successful development campaigns this year it transports a situation that is an everyday occurrence in some cultures into the context that the charity’s donors can relate to.

Thea is a fictional 12 year old girl who is going to marry her fiancee, Geir, who is 37 years old (the same age as her Dad). The blog has caused outrage in Norway and many other countries, but Thea’s situation is a reality for millions of girls globally. The campaign has captured the attention of the World’s media with articles written in the Huffington Post, Independent, BBC and Buzzfeed as well as radio and television. Over 400 people turned up at the church to protest against the fake wedding.

It seems that this style of campaign resonates with western audiences. Earlier this year Save The Children released their appeal for Syria which has had over 34 million views. The next most popular charity video that I’m aware of is Oxfam’s pregnant breakdancers with 1.5 million views. So why is this form of storytelling more effective? I suppose it helps visualise the old adage “It could never happen to us.”

A spokesperson for Plan International said “With the help of Plan celebrity ambassadors, who tweeted about the blog, the story soon went viral and had more than 130,000 readers in the first day. Several hundred readers added comments saying they were horrified, advising the girl that a marriage like this is illegal according to Norwegian laws. Some even contacted the police.”

The blog has had over 1 million unique views in Norway alone!