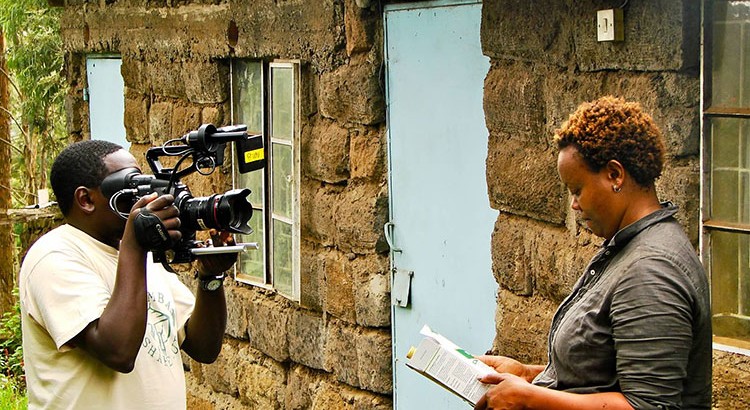 Shamba Shape Up is a reality style TV show designed to educate East Africa’s rapidly growing rural audience. The make over style show aims to give both farmer and the audience the tools they need to improve productivity and income on their farms. Each week the Shape Up team visit a different farm in a different area of the country. The team includes the film crew and a number of experts from partner organisations who specialize in the topics to be covered in the episode. The core of the series tackles issues surrounding livestock, poultry, crops and soil fertility. Other relevant topics include financial planning, solar power and harvesting rainwater.

As well as online, viewers without internet or power can SMS a database and ask for information in the form of leaflets. These leaflets are posted to people free of charge once they SMS asking for them. So far 250,000 have been distributed. Recently, Shamba Shape Up has moved to mobile, with the starting of iShamba. iShamba is a mobile information service, which gives subscribers access to a call centre, SMS service, weather reports, farming tips and deals or advice form commercial partners.

Katharine MacMahon, Communications Officer for Shamba Shape Up said “The social media has been a great tool for us, with our Facebook page becoming a hub for farmers to get advice from either us or from other farmers on the group. We run regular competitions with our partners help, and also invite people to send in photos of their farm and get involved in discussions. In general, the Facebook page is farmer-focused.

In comparison, the Twitter page, which is much smaller, has more of a partner-focus. We interact with our partners and the information they have to offer much more on Twitter, with more of a complex nature (on the Facebook page, posts must not have words which are more than 7 letters long – keeping it easy to read for farmers who may be less educated).

Last month we held a Tweetchat on #TalkSoil, in the lead up to Global Soil Week, with the help of CIAT. It was successful in both discussing the issues surrounding soil health, and also to raise the profile of Shamba Shape Up in the agricultural community on Twitter. To increase the number of Twitter followers, we aim to tweet much more than we currently do, get involved with more discussions and tweet chats and engage more with #KOT (#KenyansOnTwitter – a huge hashtag in Kenya used by millions), and connect with more farmers here.”