Twitter, if managed properly, is an excellent tool for customer service and reputation management. Oxfam’s use of Twitter in January is a perfect example. I was looking at their stream earlier today to find information about a recent video when I noticed a number of tweets about Oxfam hosting an event with somebody who is considered a racist. Oxfam had replied to everyone. This intrigued me, so I favourited all of the tweets and when I got back to my office decided to write this blog. Unfortunately my manic favouriting had obviously alerted Oxfam that these tweets were still in their stream and they deleted them before I could take any screen shots. But fortunately for me I was able to track down one of these tweets via a Google search. 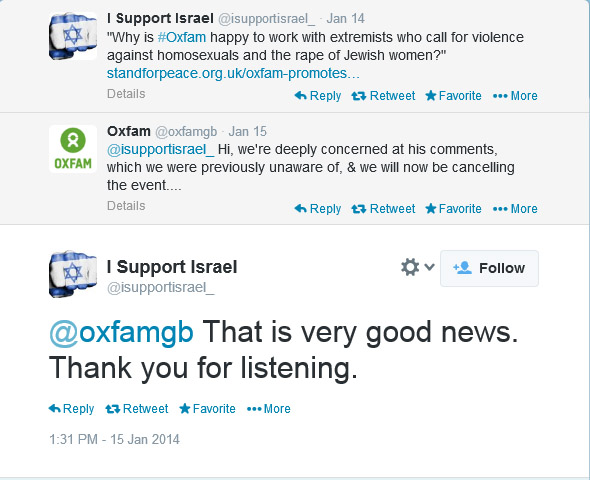 As a result of @isupportisrael and a number of other Tweeple, Oxfam decided to cancel the event and were able to minimise any further negative discussions. A perfect example of reputation management.

In January, Oxfam tweeted 159 times (even more before they deleted the tweets I mentioned earlier). Of these 159 tweets, 40 were retweets and 18 included pictures. Their management of Twitter is excellent with a variety of tweets about research, survey results, retail discounts, event promotions, sponsorship appeals, videos, infographics, photos etc. They are really good at building a community by answering direct tweets and also scanning the Twitterverse and communicating with people who have helped Oxfam with its cause through activities such as fundraising or donating clothes.

Their most popular Tweet in January with 266 retweets is interesting as they had posted the same information, but with a different angle twice earlier that day. This proves that it is very worthwhile repurposing the same content at different times of the day. On the last and most popular tweet, they asked people to retweet. Is it really that simple? Read some of Dan Zarella’s research if you want to find out more about the science of retweets.

In just one months worth of tweets there’s load of other interesting stuff to analyse such as Oxfam’s use of celebrities lilke Stephen Fry, Lauren Lavern, Zoe Ball and more importantly the accepted resignation of Scarlett Johannson as a global ambassador. Maybe another day….